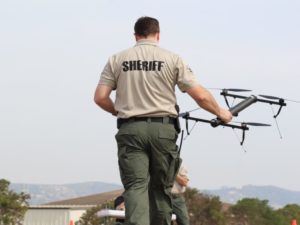 The Unmanned Aerial Systems Unit (UAS), established in 2013, is one of the premiere units of its kind in the United States. It was the first UAS unit in California to receive its Operational COA (Certificate of Authorization) from the FAA as well as one of the only UAS units in the United States to hold nation-wide operational authorization from the FAA.

The unit is a collateral assignment and is currently comprised of 11 pilots. Each pilot is highly trained and holds an FAA certification to operate an Unmanned Aerial System. The unit currently operates with four types of airframes (Aerovironment Qube, DJI Matrice 210, DJI Phantom 4 and DJI Mavic). This diversity allows the UAS Unit to be available for both day and night operations. The small form factor and portability of the airframes allow for them to be deployed in areas that may not be reachable by ground personnel or may be too densely populated to be scanned by the Manned Aviation Unit.

The UAS Unit or portions thereof can be requested for use by the various agency entities, such as: patrol, detectives, narcotics, and the gang units. The UAS Unit is capable of providing the full team or one component of the team depending on the circumstances and requirements of the mission. This flexibility allows the UAS Unit to best utilize its pilot corps and state of the art equipment to limit human exposure and enhance the overall safety in life saving critical missions. The UAS Unit is also available to other law enforcement agencies through mutual aid requests.