Suspect Arrested in Canyon Country for Narcotics and Weapons Charges

Suspect Arrested in Canyon Country for Narcotics and Weapons Charges

Country, who was involved in the sales of narcotics to residents of Ventura County.

On November 30, 2018, Narcotics Detectives conducted a traffic stop of Navarro as he left his

search warrant and arrested him for narcotics related charges stemming from the investigation.

residence located in the 16000 block of Silver Saddle Circle in Canyon Country. Detectives

commonly referred to as ecstasy. Molly is an illegal and dangerous “club drug” that is abused for

its stimulant and hallucinogenic properties. The use of Molly can lead to severe medical

complications and even death. Detectives located scales, packaging, money believed to be

proceeds from narcotic sales, a loaded, unregistered firearm and a ballistic vest. 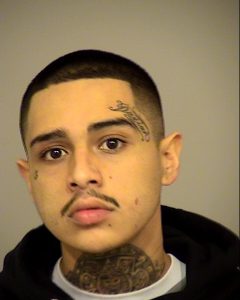 The sheriff’s office has developed a new application that will help deputies conduct evacuations more efficiently during disasters. https://local.nixle.com/alert/9112239/

Deputies from the Moorpark Patrol Station arrested a suspect for assaulting a family member. After further investigation, it was [...]

The Thousand Oaks Police Department strives to promote traffic safety within the community. In an effort to recognize certain [...]

The Ventura County Sheriff’s Office would like to remind community members of the importance of Gun Safety with a [...]

Detectives with Camarillo Patrol Services arrest a suspect for possession of narcotics and firearms. https://local.nixle.com/alert/9243049/

The Ventura County Sheriff’s Office will have additional officers on patrol looking for drivers that are violating the state’s [...]

On March 2, 2022, four suspects conspired to commit a residential burglary of an occupied residence in the city [...]