On November 10, 2018, Thousand Oaks Police Department patrol deputies were dispatched to the 1700 block of Bridle Oaks Court for a suspicious subject that was found in the owner’s residence. The residents returned to their house after being evacuated due to the Woolsey fire and found the man running from the residence, not wearing shoes, and carrying what appeared to be clothing. Deputies viewed video surveillance from a neighbor’s house and located an early 2000’s Ford Escape Sport Utility Vehicle fleeing the area at a high rate of speed. Deputies searched the area but the suspect was not located. The homeowners searched their residence and discovered that articles of women’s clothing were missing.

On November 14, 2018, Thousand Oaks Police Department patrol deputies were dispatched to a suspicious subject call at the Old Meadows Park in the City of Thousand Oaks. Park personnel reported that they located several articles of women’s clothing in the public restroom. Upon review of the video surveillance near the restrooms, park personnel saw an unidentified male subject walk in and out of the bathroom in various stages of undress and wearing women’s lingerie. Also seen in the video was what appeared to be an ankle monitor on the subject’s left ankle. The subject is then seen getting into an early 2000’s Ford Escape matching the description of the vehicle captured on video surveillance leaving the Bridle Oaks Court scene.

East County Patrol Services Investigations Bureau detectives conducted a follow up investigation and were able to identify the suspect at Jonah Bregman of Northridge, California. Bregman is a PC 290 registrant and is currently on California State Parole for residential burglary.

On November 17, 2018, Detectives coordinated with California State Parole and Thousand Oaks Police Department patrol deputies to locate and arrest Bregman. Bregman was arrested at a relative’s residence located in the 1600 block of El Verano Drive in the City of Thousand Oaks. Detectives subsequently conducted a parole search of Bregman’s residence in the City of Northridge and located the women’s clothing identified as belonging to the Bridal Oaks Court homeowner. Numerous other articles of women’s clothing were also located.

Bregman was booked into the Ventura County Main Jail for PC 459 / burglary and PC 647(a) / engaging in lewd conduct. In addition, California State Parole placed a parole hold on Bregman. Bregman’s bail was set at $70,000.00 and his arraignment is set for November 20, 2018. 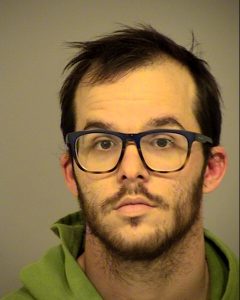 A multi-agency investigation resulted in the arrest of seventeen people and the seizure of 192 pounds of methamphetamine, 5 [...]

Detectives concluded a four month long investigation by arresting a Camarillo man for numerous vandalisms that occurred in Camarillo. [...]

Thousand Oaks – Coffee with the Chiefs

Camarillo detectives arrested a Simi Valley man who was on probation for grand theft after the man was interrupted [...]

Sheriff’s deputies and detectives responded to an area along PCH near Deer Creek Road for a beached vessel containing [...]